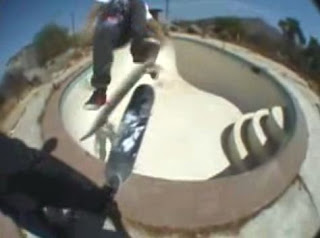 Josh "Peacock" Henderson is at it again with yet another kicks ass, back yard, Pool flick: Cancer Dust. Josh has been doing this for a while and his films are 100% core pool skating at its' best. Check out the trailer and buy the film when it hits!

I met Art in early 2004 at the Chino skate park. He was blasting the biggest back side airs I had ever scene in a park, just huge. We got to talking and next thing you know he was on the team. He left in 2006 to start his own company called "Hardcore" and it did not work out as planned. He came back for awhile in 2007 and left again to try his luck with Scarecrow and is still killing it with them to this day. Art always stoked me out with his ability to adapt to new terrain and his fearless effort he skates with. Gracias hermano for your dedication and style. 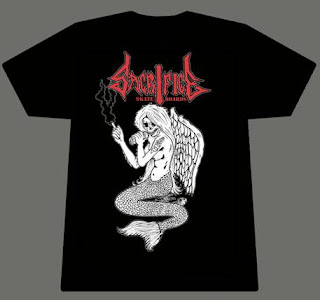 Chris Thatcher hooked us up with a killer new graphic, "Sacrifice Siren". Stickers are already out and shirts should be in by next week. Buy or Die in 2009! Look for more Thatcher art series to come. 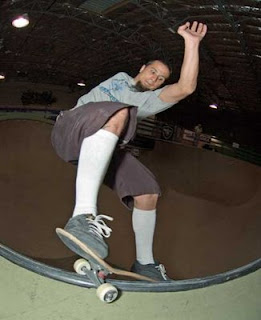 Sacrifice Team Rider Dave Deluna throws down a front smith at the killer wood bowl at 702 Skateshop/park in Vegas. 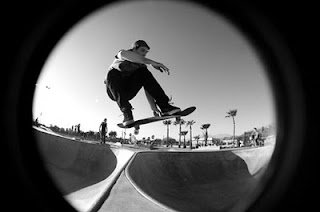 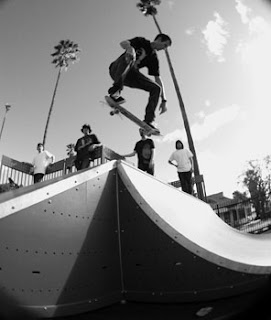 Black and White is Alright

Dustin Hake is a new young gun photographer out of the I.E. Sacrifice is stoked to be working with him on our new zine and other projects to come. Here a killer little shot of Sacrifice rider Zach Peacock rolling up at the new above ground skate park some where deep in the Inland Empire.

A very sad day for skateboarding

hi there - there should probably be a new issue of concussion on your doorstep by now, or maybe early next week. unfortunately it is probably the last one you'll get, at least in its current glossy 8x10 form. as many of you know this has never been a for-profit operation and we've been skidding by, barely breaking even for the past few years. so when the recession kicked into high gear late last year, many of our longtime advertisers had to pull the plug. we lost about 1/3 of our core advertising base in a month, as many of you know because sales at the end of the year tanked. i could've shrunk the page count in half but to use the cancer patient analogy, i'd rather go out with a bang than have it die a sad, slow and painful death. personally i feel that this is one of the best issues we've put out (aside from the flaky art direction, sorry) and so this is a good way to end this chapter of concussion. i only found out about this in very late december and have been kicking around our options, but deep down i knew it was a bag and it is time to cut our losses and not get under any more debt. and that's fine, im pretty busy as it is. i could use more time skating and shooting photos and less time behind the computer. i do enough of that at my day job. but it's sad nonetheless, i started concussion right out of college and i'm now 36, so that's a good 15 years of doing something that is not your day job. concussion may continue on as some sort of photo / *bleep* talking website or i might do a small size zine on the copier at work, but the days of printing 10,000 copies in the bookstore are done unless i win the lottery, or one of you guys wants to publish us. just kidding about that last part. so id just like to sincerely thank all of you for your help and support over the years, couldn't have done it without you. like i said, we have never been for profit but without all of our advertisers we wouldn't have even had the money to break even and keep printing. on top of that you all know that small mags like us don't always reach the most people or the target consumer and so it was always nice to have that support from y'all because it felt like you were supporting something that was more true to pure skateboarding and less so to mass market advertising. anyway, we have a dvd coming out in a few months (irony, no?) and a *bleep*load of back issues and old product to unload so we can get out from this mountain of $10,000+ debt we have from this latest issue, after that i'll figure out what i feel like doing and we'll see where it goes. part of me wants to start something new and part of me wants to wash a couple vicodins down with a few beers and go skate some more pools. whatever, it's been fun. ill be in touch about new projects as they arise, if you have any web budget for this year we will probably be interested in tapping into that at some point. we're probably going to relaunch the website with a redesign at some point, although right now everything is up in the air. feel free to hit me up with any suggestions you have or whatever. anyway i wanted you to hear it from me first although the issue has shipped and some of you already know the news. it was a go but now it's a bag, thanks for everything. xoxo - davoud 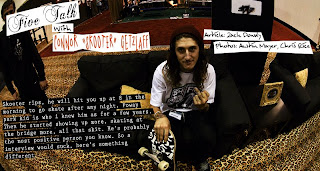 Getzlaff gets an interview... 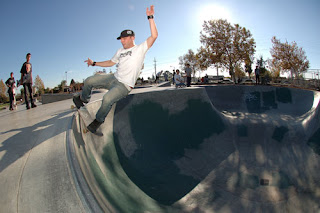 I was introduced to Jonny from a friend of mine at JUICE Magazine. After a few phone conversations, I convinced him to make the trip down to So. Cal to hang out with the team. Jonny is an amazing skater, with more talent than most. He is also an amazing musician and has played in bands like The Clay Wheels and The Cliftons. He now has his own band called The Depressives. Jonny wrote the song "Sacrifice" for our Por Vida Video and it is featured on his first album "Rebound Town" on Reach Around Records. Thanks Manak for being so original and an all around good guy!

Sacrifice Hooks up with Chris Thatcher 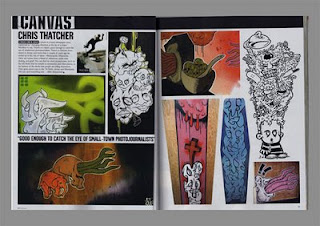 New Artist for '09
Chris Thatcher is an amazing artist from the mid-west area recently re-located to sunny So. Cal. Chirs is working on some new shirt and board graphics for us locos here at Sacrifice Skates. Look for the first shirt to hit in about two weeks.

For more info on Chris, check this link out: Chris Thatcher