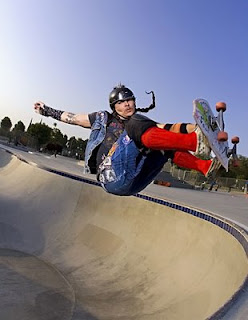 Mi Hermano
Alot can be said about Richard: artist, skater, father, husband, man of God, and my brother. I met Richard in early 2001 just after the collapse of Raven Skateboards and it was a dark time for me. I was bummed out on how cruel the skate industry really was. I ended up at the Northridge park with Jeff Greenwod and Mike McKinnis for a "cheer up session". They introduced to Richard and we just hit it off. A few weeks later Richard and I are eating burritos at my pad trying to think up a new name for the company. I tell him I never realized how much sacrifice was involved in trying to keep your own thing going. He looked at me and said, "Sacrifice, that's it!". He drew the first art work for Sacrifice right there on my kitchen table, burrito juice and all. I owe this man everything and that's why I call him my brother, "mi hermano".